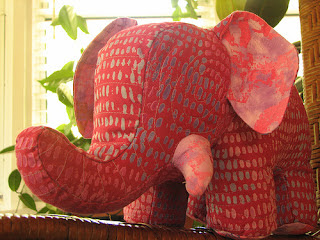 This little guy is just TOO cute for words so I had to include some pictures of course! Rumpled Quiltskins. That's the name of the patterns and I fell in love with them when I saw them. I wanted to make all of them but settled on three...the Elephant, the Lion, and some fishies. Lions have fluffy manes, these fishies have lots of pieces, so I thought I'd start with the elephant.

This pattern is not for the faint of heart or the easily discouraged. There are lots of pieces (some rather small), some "gasp" hand basting, some rather precise seaming, and some stay-stitching and clipping. The machine stitching is rather time consuming as you have to quilt all these pieces individually before assembling. It wasn't hard and I just drew the lines on the muslin backing, put the right color in the bobbin and stitched on the lines. The instructions say to use tracing paper and a wheel and transfer the markings to the right side. I didn't have tracing paper but I did have lots of thread and a pencil! I was told they are not "stuffed animals", they are "soft sculptures" and I think this is a better way to look at these little creatures. However you look at it, they are 100% adorable and worth the effort.

The fabric is Lonni Rossi, which you all have seen me argue with before! Fortunately for this little guy, directional fabric was not an issue as it was in small quantities. I do have to confess though, I tried to get Pickled Mushroom on the bottom of one of the feet. Much to my dismay when I got to that part, the instructions said that the feet were oversized to accommodate different size legs! The resulting words turned out to be "ickle hroo". Hence this elephant will be named Ellie Ickle Hroo. 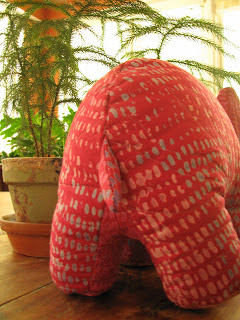 Posted by Rena No comments: 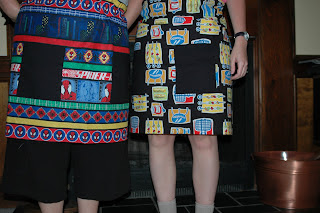 Last month, my best friend from high school came to visit me. Before she arrived, I was fretting about what we were going to do while she was here - what did we have in common after all these years? It had been 10+ years since we'd really spent time together, but I knew it would be a great visit she blurted out "Des, I want you to teach me to sew while I'm here". I just about ran my car off the road I was so surprised. 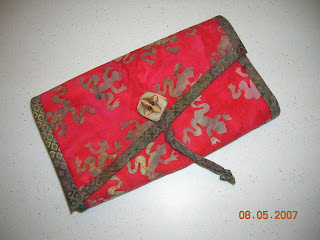 Martha gave this small bag by Studio Kat a great review and I sure do appreciate her plug.

The frog fabric is called Bazaar and it has been very popular.

Posted by Unknown No comments:

Email ThisBlogThis!Share to TwitterShare to FacebookShare to Pinterest
Labels: Bags

These are not quite finished. They need buttons and a hem but I am so PROUD of myself. These is the first thing I have sewn for me in ages and the first thing I have sewn in a decade that has a zipper and pockets. I took a great class by Pam Howard. She teaches and open style class at a local sewing machine store. We did a muslin and I started the pants yesterday, finished them this am. There are a bunch of issues but I will wear them and I will make more. Now off to find the parts of my machine needed to make button holes.

Pattern Alterations: I had to make a lot of alteration in this pattern. The pattern was too small for me so we redrafted the pattern to fit my hips and waist. I added an extension onto the contour waist band to bring the waist up to my natural waist (and to cover my undies). I put the dart in up through the back waistband. I had to scoup out the crouch seam to create more space for my backend. I moved the pockets to the side seam, out of laziness.
Posted by Unknown 1 comment:

Some Art Fabric | Promote Your Page Too

New Posts from Blogs I love